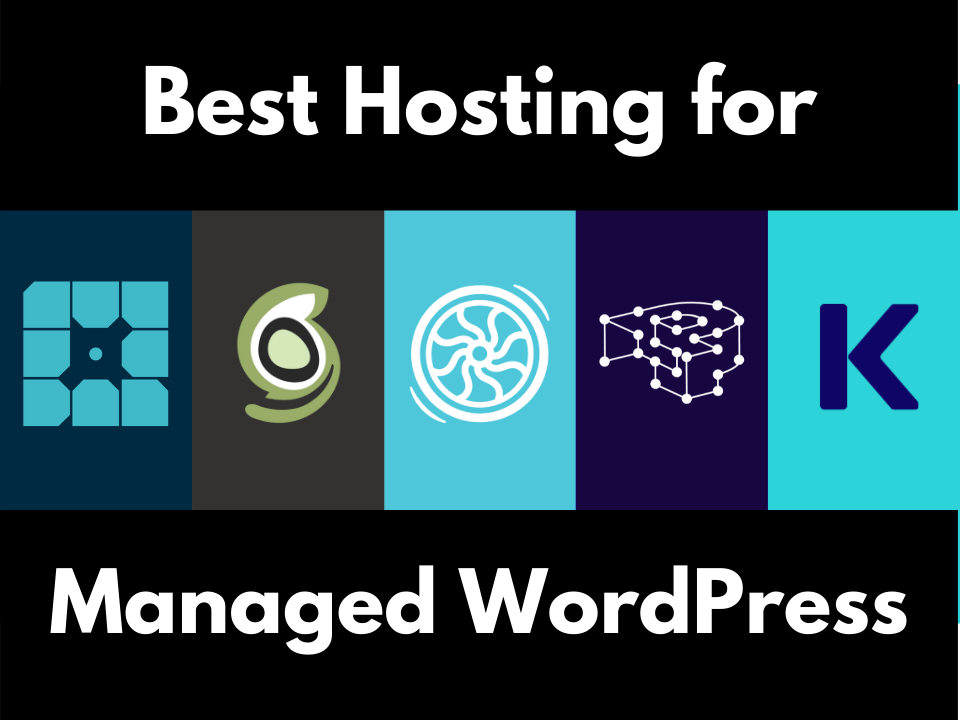 Ultimately, my goal was to find out which managed WordPress hosting provider is the fastest. Why? Because site speed is not only important to your visitors, but it’s also an aspect in Google ranking factors.

First and foremost, I determined that London was a common data center location between all of these hosting providers. After purchasing a subscription to Kinsta, SiteGround, Pressidium, Flywheel, and WP Engine, I installed an identical WordPress website at each host. The WordPress websites had a single 1,500 word blog post, three images, and were running the Twenty Twenty theme.

In order to ensure a fair playing field, I made sure that each website and hosting environment was identical as follows.

There were no other plugins or optimizations except for the server-level caching that was by default available for each one of these hosting providers. This ensured that this set of tests were “out of the box” tests.

Each individual test run collected a series of page speed metrics which we’ll look at next.

The first metric is server response time which is the time it take for the server to send the response. This is precisely the difference in time between the start of the request and the end of the response.

As you can see below, Pressidium and SiteGround were the clear winners with a server response time of just 12 ms. Not too far behind were WP Engine and Kinsta with average timings of 17 ms and 19 ms respectively. 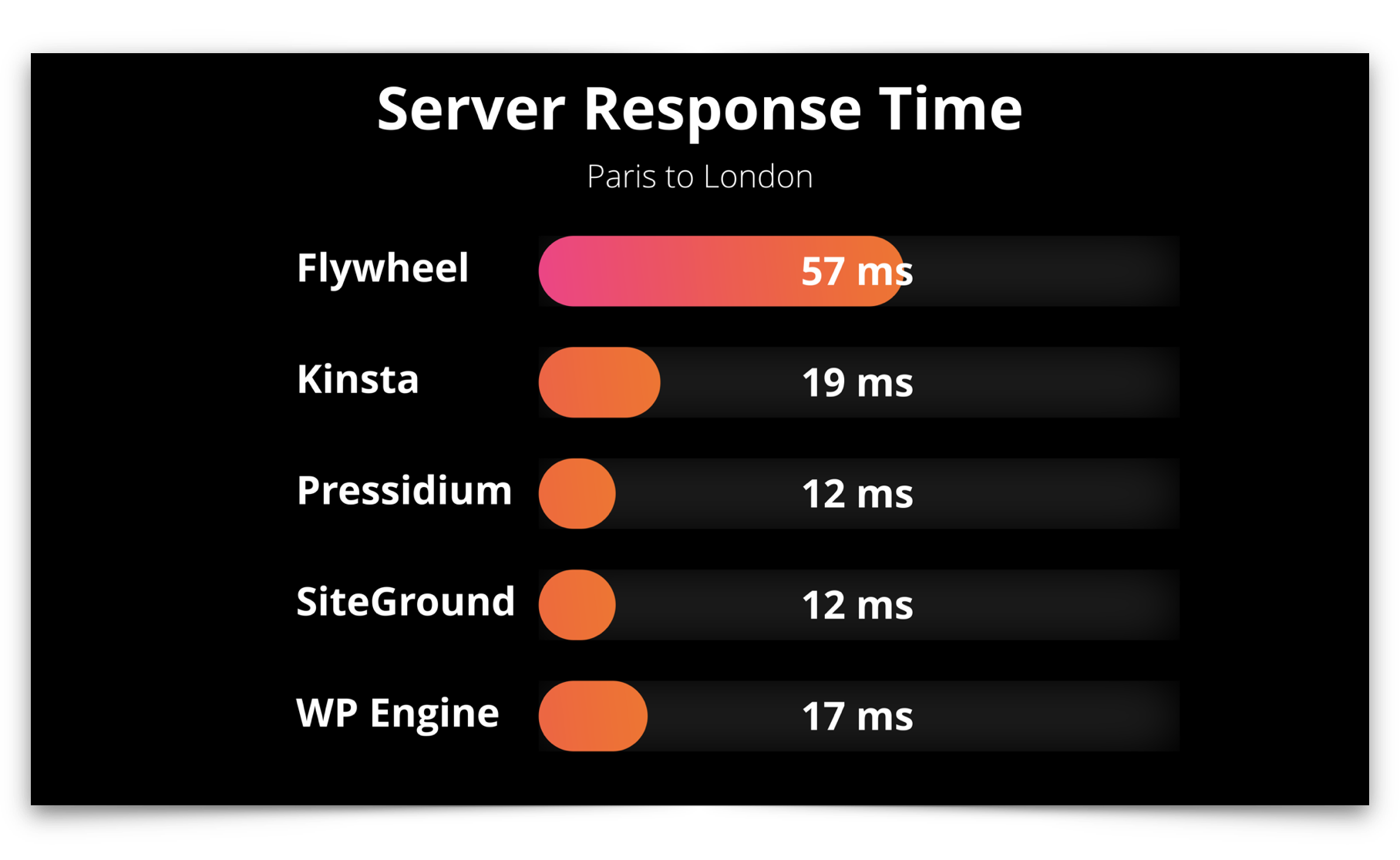 The next test is the time to first paint test. This is a measurement of the time when the first paint happens on the screen.

Again, SiteGround and Pressidium beat out all of the other managed WordPress hosting providers with 359 ms and 402 ms average timings respectively. 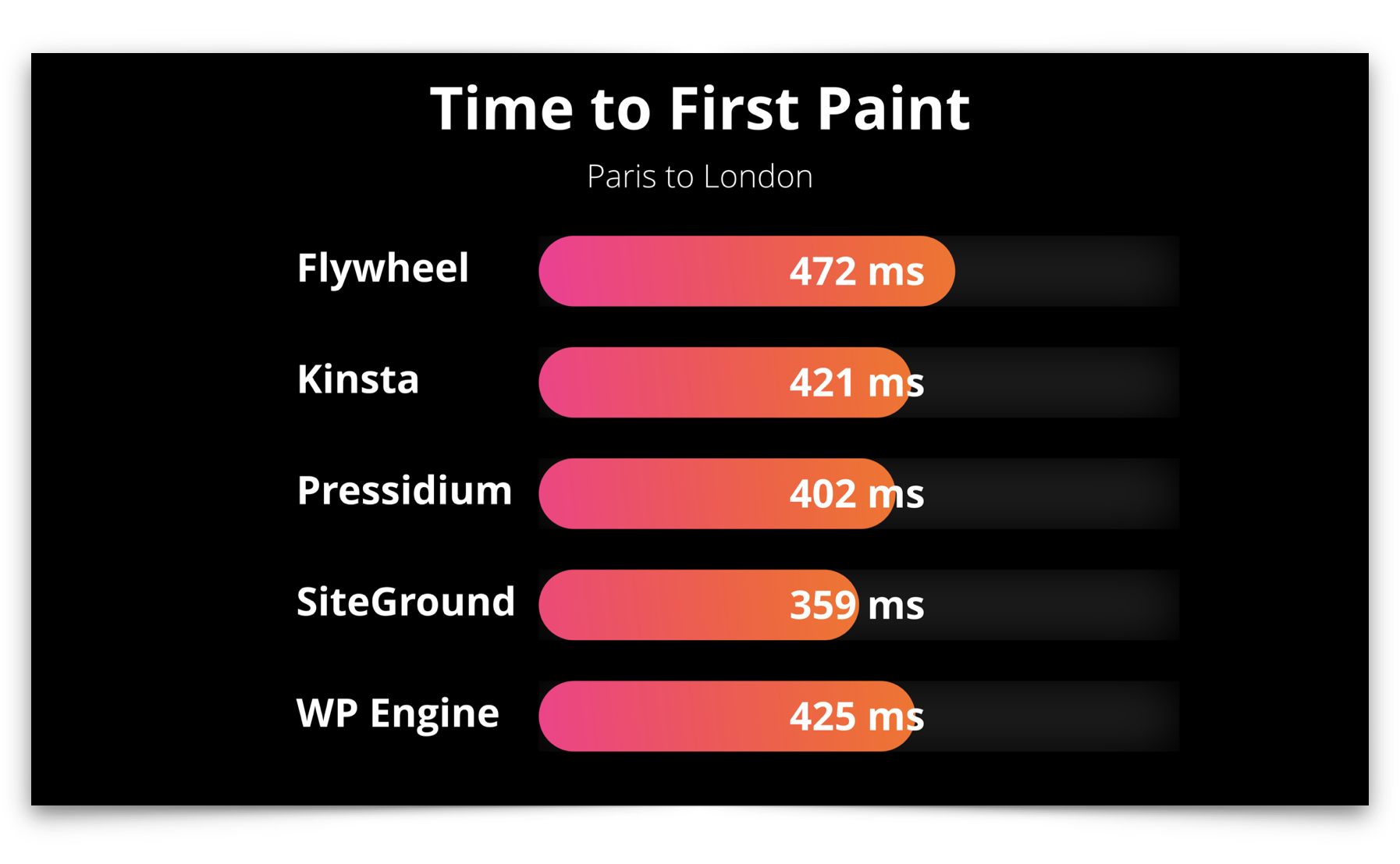 The final test, which I consider to be the most important, is the page load time test. By definition, this is the time it takes for page to load from initiation of the page view to load completion in the browser.

Surprisingly Pressidium and Kinsta edged out the competition with timings of 505 ms and 509 ms respectively, only separated by 4 ms. 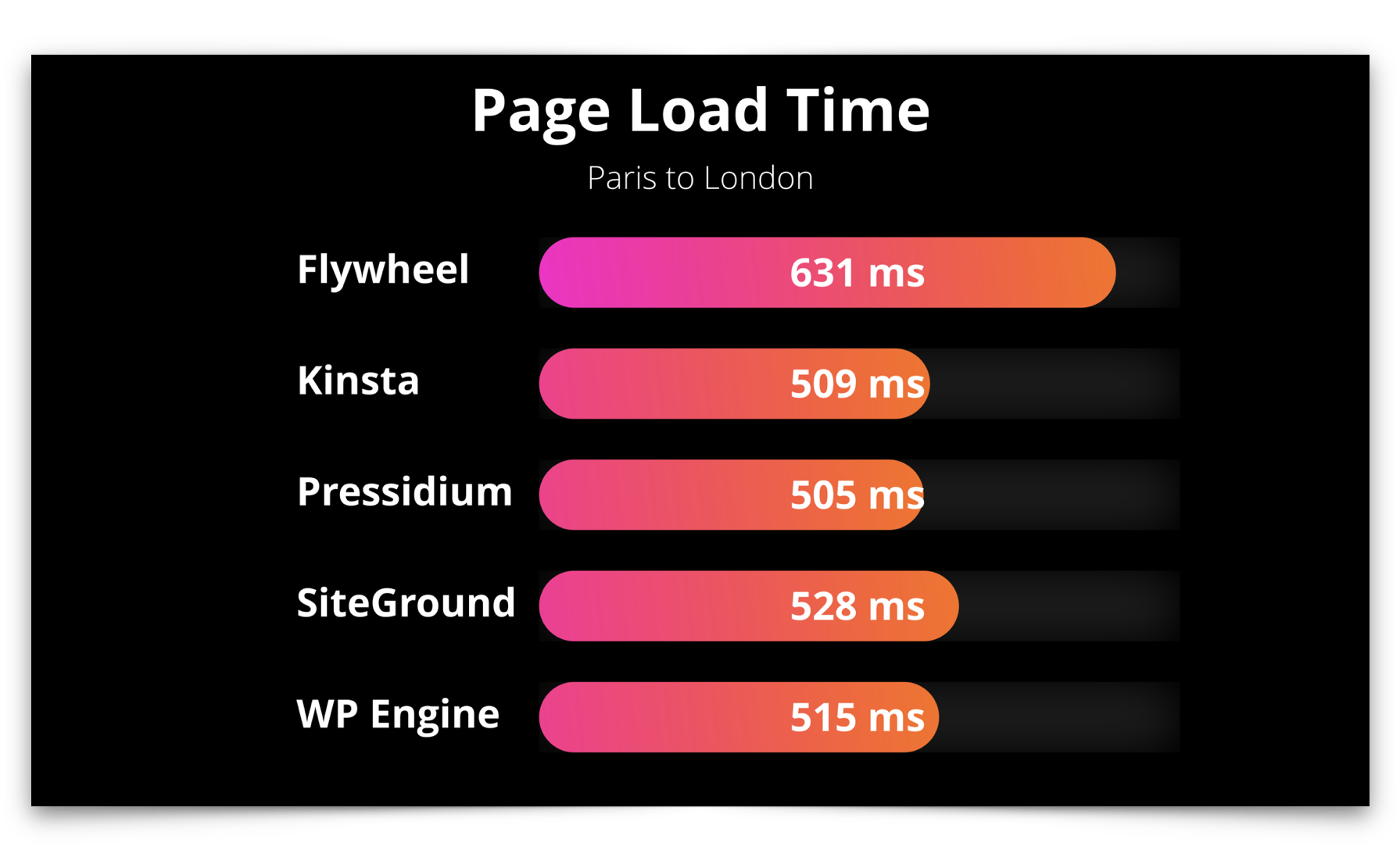 When considering the domestic speed tests results alone, it seems like Kinsta and Pressidium are your best bet when considering fastest page load times.

However, in order to make these tests as comprehensive as possible, I moved the test client from Paris to New York and ran the set of 100 page speed tests again to each one of the respective data centers back in London.

Let’s look at the second round test results.

While Pressidium and SiteGround beat out the competition again in the server response time test, WP Engine and Kinsta were not too far behind. 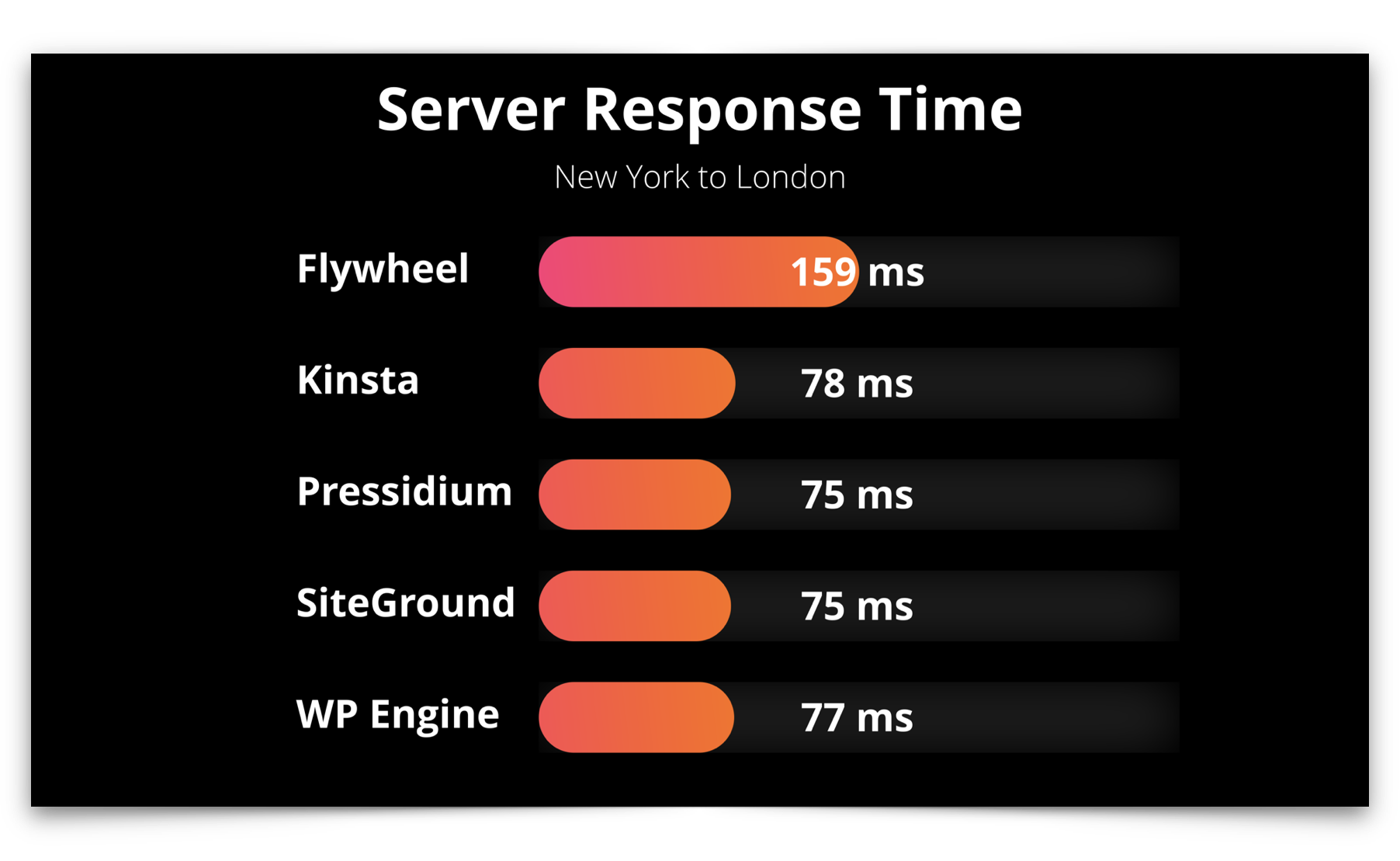 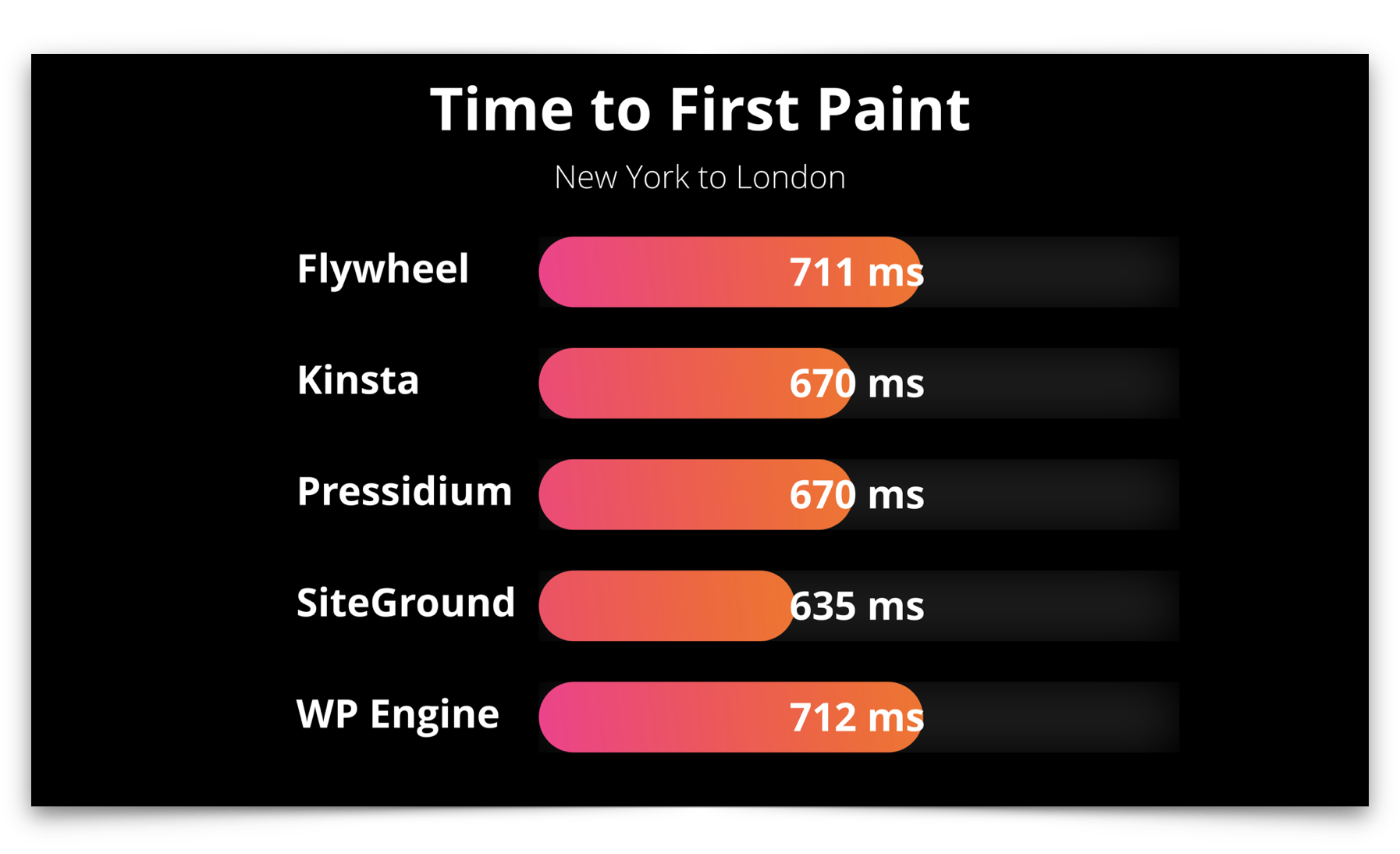 Pressidium yet again had the fastest page load time with an average timing of 856 ms from New York to London. Kinsta and Flywheel were not too far behind with average timings fo 947 ms and 920 ms respectively. 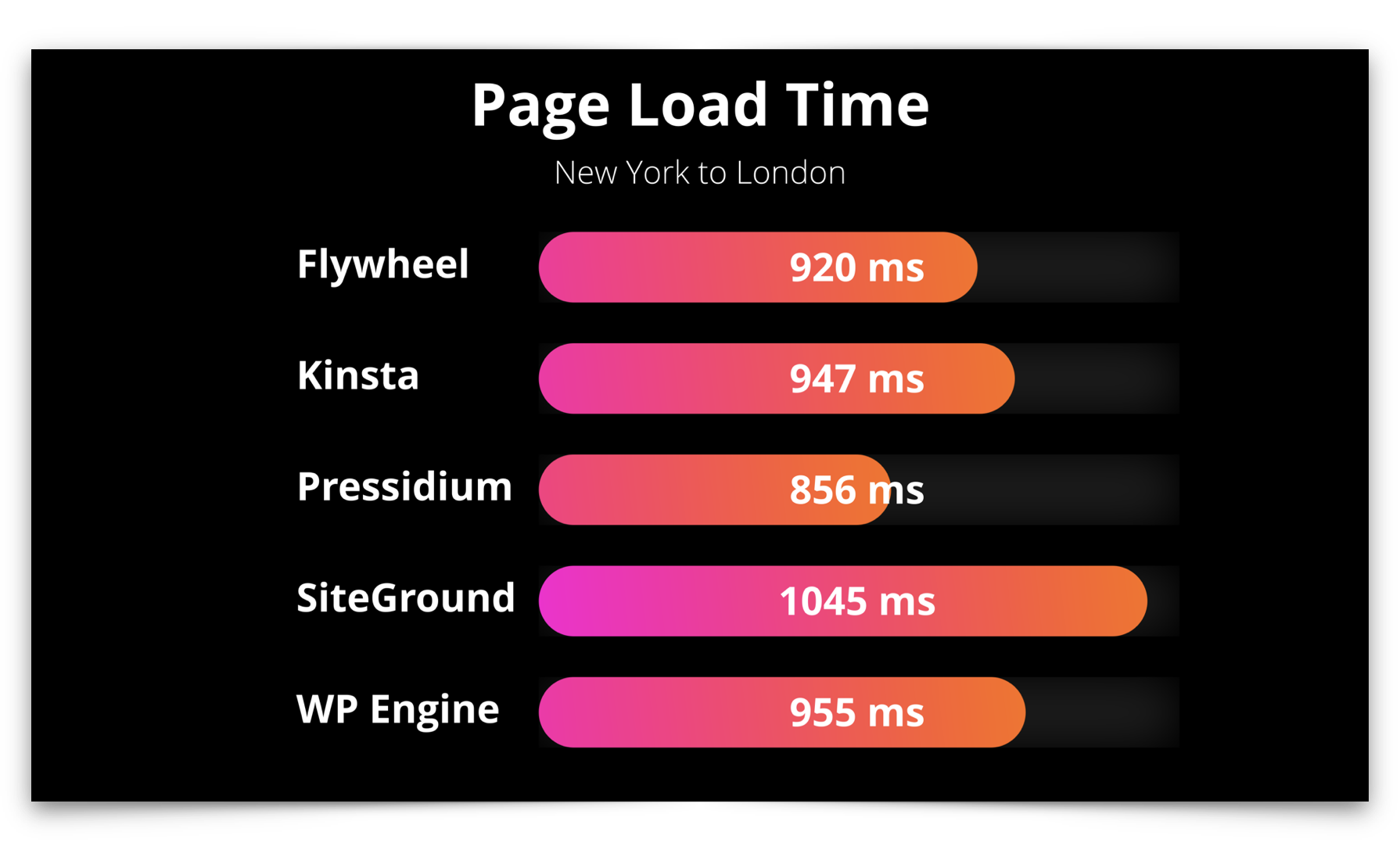 Which Managed WordPress Host is the Fastest?

Based on my experience with Kinsta (when considering things such as customer support and sleekness of the dashboard), I can personally recommend Kinsta. While the cheapest plan for a single website at Kinsta and Pressidium are both $25/month, it’s worth pointing out that Kinsta allows twice as many monthly visits as Pressidium (20,000 vs 10,000) and also includes a CDN whereas Pressidium does not.

The best budget managed WordPress host is SiteGround. SiteGround has a great balance between low cost and speed. The cheapest regular-priced plan at SiteGround is only $11.95/month which includes CDN and an SSL certificate. SiteGround also has their GrowBig plan which allows you to host unlimited WordPress websites for just $19.95/month.

To summarize, here’s the ranking of managed WordPress hosts from fastest to slowest.

As someone with experience hosting websites at all of these companies, don’t hesitate to let me know if you have any questions in the comments below.