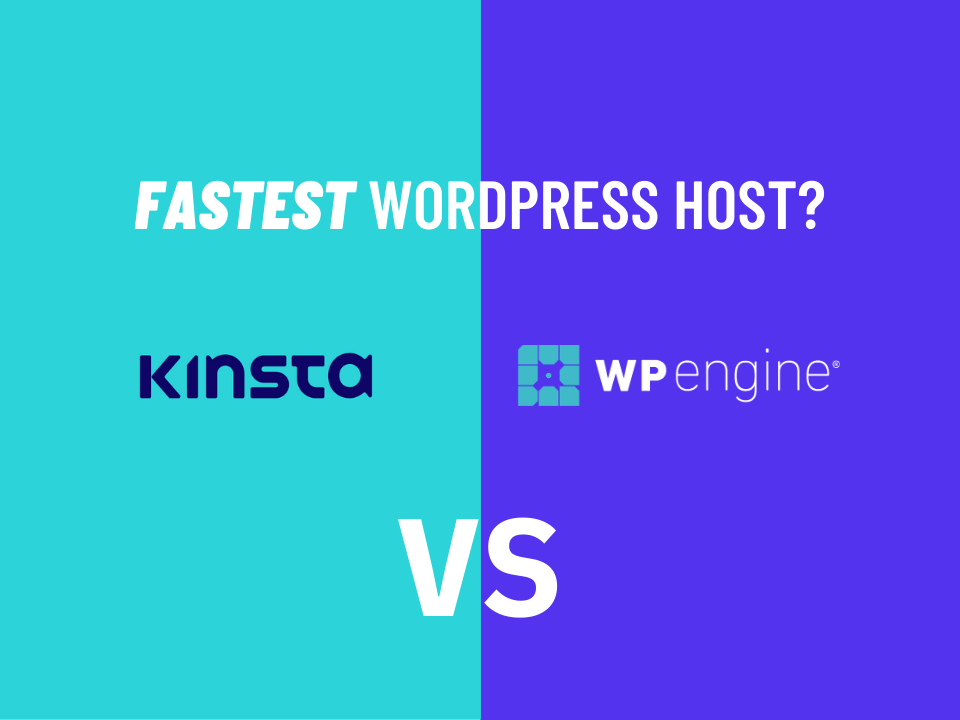 One of the most important SEO ranking factors in 2020 is site speed. Shared and VPS hosting doesn’t cut it, so that’s where managed WordPress hosting comes into the picture. But not just any managed WordPress host… you want the fastest for your website. Well, so did I, and that’s why I put the big two to the test:  Kinsta vs WP Engine.

Through a series of comprehensive speed tests, I was able to determine which managed WordPress hosting provider is the fastest. To my surprise, there was a big difference in site speed between the two.

In this comparison of Kinsta vs WP Engine, I’ll explain how I conducted the speed tests and we’ll dive into some numbers.

By the end, you’ll know exactly which host is the fastest for your WordPress website.

The #1 Reason Why Site Speed Matters

SEO is pretty simple, especially when it comes to site speed. Google knows exactly how fast your website is, and because Google wants the best experience for its users, it prefers fast websites over slow ones.

Think about it. Google won’t shoot itself in the foot and send hundreds or thousands of users to your website if it’s slow. Knowing that your slow website can’t handle the traffic, Google will only trickle traffic to your site.

By having your website served from a fast hosting provider, Google will recognize that your website can handle high traffic.

On the contrary, having your website with a slow host means your traffic will never reach those levels.

Bottom line: if you ever want your website to grow, the first step is to ensure your website host can handle that kind of traffic.

How I Measure Site Speed

Since I already have a full-length blog post on my site speed testing procedures, I’ll give you the shot version here.

Basically, the only open-source tool that allows you to automate and measure the performance of websites is Sitespeed.io. Because I’m a software engineer, I can easily setup testing servers around the world and conduct these speed tests.

Sitespeed.io allows me to run a series of comprehensive speed tests and automatically collect metrics in the form of an HTML website. These metrics include time to first byte (TTFB), first paint, and page load time amongst dozens and dozens of others.

While there are other web-based tools that allow you to collect these measurements, Sitespeed.io allows you to do it in an automated manner from pretty much anywhere in the world.

All that aside, the most important aspect of comparing site speed of different hosting providers like we’re doing with Kinsta vs WP Engine is to ensure a consistent testing environment. In a running race, you can’t compare a runner’s time on a hilly course with his time on a flat track. Similarly, we need to take the necessary steps to build a level playing field when comparing hosting speeds.

By standing up a test client server in Tokyo and two identical WordPress websites in Singapore (1 hosted on Kinsta and 1 hosted on WP Engine), I created a fair testing environment.

As for the hosting environment, each website utilized the following optimizations.

In addition, both websites used a domain name registered with Namecheap and did not have an SSL certificate installed.

The WordPress website itself contained a single 1,500 word blog post with three images. The page under test was the homepage which displayed the full text of the most recent post.

For each host, I ran a series of 100 back-to-back speed tests on the identical WordPress websites. Again, the test server was located in Tokyo and the websites were at the respective data centers for Kinsta and WP Engine in Singapore.

The browser used to conduct the tests was Google Chrome. Between each individual test run, the browser cache was cleared to simulate a user visiting the page for the first time.

At the end of the series of tests, HTML reports with averages for each metric were automatically generated.

Across the board, Kinsta outperformed WP Engine. For some tests, Kinsta was over a factor of 2 faster than WP Engine. I honestly thought this would be a much closer race.

From right out of the gate when looking at the average server response time, Kinsta was already 21 ms ahead of WP Engine. Even more, Kinsta had its first paint on average 26% faster than WP Engine.

Finally and probably most importantly, Kinsta really showed its power with an average page load time of just 852 ms. Comparatively, WP Engine has a respectable page load time of 1.97 seconds, but relative to Kinsta, there’s just no competition.

Now since I really couldn’t believe that Kinsta was this much faster than WP Engine (or rather WP Engine was this slow), I ran the set of tests again. As you might expect, I saw very similar results. WP Engine did slightly better for this round of tests, but still nowhere near Kinsta when it comes to performance.

WP Engine is actually able to compress web pages better than Kinsta. Below you can see that WP Engine compressed the same exact WordPress website to a size of 635 KB while Kinsta compressed down to 638.2 KB.

While the compression size difference of 0.5% isn’t substantial, every byte counts when it comes to site speed. As you know, the less data that needs to be transfered, the faster a web page will load.

From the results of this particular test, it appears as if WP Engine has a better image and CSS compression technique than Kinsta. Unfortunately, even with this advantage, Kinsta is still able to deliver web pages faster than WP Engine.

Blowing WP Engine out of the water, Kinsta is the clear winner when it comes to site speed. Built on top of the Google Cloud Platform, Kinsta leverages some of the best hosting infrastructure available in 2020.

On the surface, WP Engine and Kinsta seem identical. They have similar pricing structures and promises to be the best managed WordPress host. However, you must take the marketing information about each host with a grain of salt. As an independent third party, I only present to you the facts about how these two managed WordPress hosts compare to each other when it comes to speed.

While that’s true, I have partnered with Kinsta to spread the word about their managed WordPress hosting. In doing this, I receive a commission when you sign up for a hosting plan with Kinsta when you use my referral link.

While I am genuinely interested in hosting my personal WordPress websites on the fastest infrastructure, it’s nice to be able to promote a product that I use and love.

With that said, if you have any questions about hosting your WordPress website with Kinsta, let me know in the comments below. As someone who has already made the leap to Kinsta, I am here to help you.